Glued up the bottom of the ama... stitch and glue style... with epoxy/sawdust mixture a few days ago. clamped the side on for a eyeball check... the bottom is 3/8 inch b/c plywood and the sides are 1/4 inch maple plywood... it has very thin veneer and a thick core... not ideal but plan to reinforce the sides inside and out with fiberglass and epoxy. 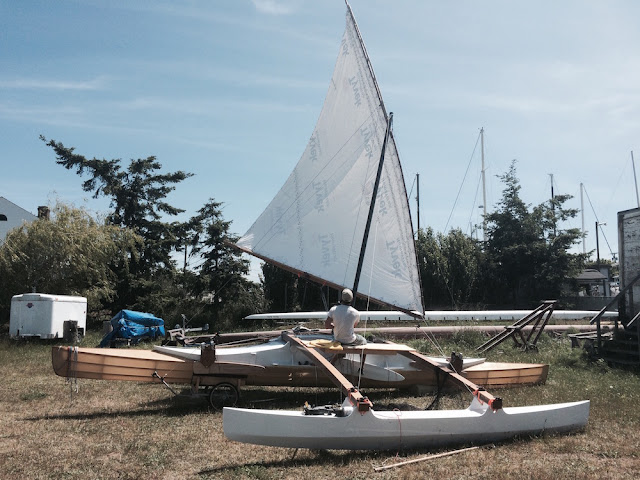 It became more and more obvious that I just as well go ahead and build a full size version rather than continue to fiddle with the models. Sonner or later you got to build your first proa... just to see what you would do different should you build another. This is the 24 ft main hull... complete with dragon heads... and will have about an 18 ft ama. This is based loosely on Gary Dierkings Wa Pa...  though I'm thinking it might make building it easier to make the dragon heads a bolt on addition... just clamps holding this together for the pic. The plan is to have bamboo cross members... set on the stanchions with another set to be in the center. Just a plain butt splice three sheets of plywood with the stanchions located at the splice.A little beamier than his design... about 24 inches widest spot on the bottom... a bit more flare in the sides as well... I hope I don't regret it... just recently noticed that the Wa Pa's built to plans sit pretty deep in the water with two aboard... The ama will be a bit more beefy as well. More interested in more load carrying ability than maximum speed.

Like I said... you need to build one to see what you'd do different. 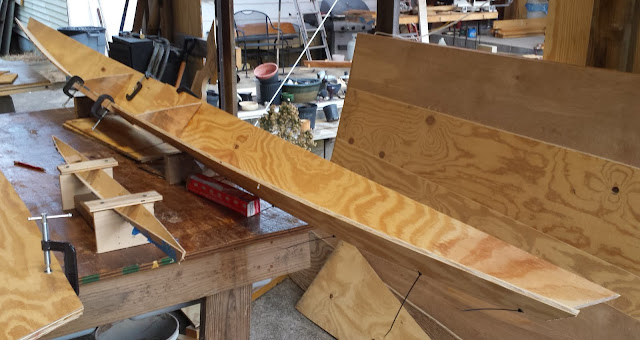